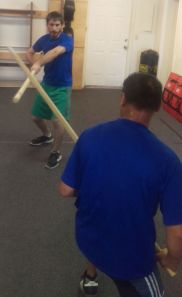 Due to the length, the practitioner need a strong low stand to generate power and support this long pole. Long pole also is a good training tool to build up the power and strength to wrists, arms, punches and hip.

Most Chinese martial arts styles use shorter pole (approx. 5 foot length) and fight with both side of the pole. Wing Chun long pole tapered off to the front point. The fighting method is only to use one end (front point) from the pole to fight. In Chinese martial arts, we call this 單頭棍Daan Tau Gwan. This will of long pole fighting can be easily to get a better power and distance control.

In the Qing dynasty, at the southern part of Canton province, China. There was a group of people who performed Chinese opera lived on the boat and the boat was painted in red color.

According to legend, Wing Chun Luk Dim Boon Gwan was from Shaolin Kung Fu. Originally it had a different name and more than 6 1/2 moves. Later the Wing Chun practitioners from the red boat kicked out all the fancy moves and kept 6 1/2 moves that similar to Wing Chun principles. They also added this long pole form into the Wing Chun system.